IMPULSE is an all-diode-pumped, direct-diode-pumped Yb-doped fiber oscillator/amplifier system capable of producing variable pulse energies up to 10 microjoules at user-selectable repetition rates between 200 kHz and 25 MHz. With 20 Watts average power output at 2 MHz, IMPULSE offers more than an order-of-magnitude higher than has traditionally been available in a one-box ultrashort pulse laser design.

IMPULSE is based on a revolutionary new concept in mode-locked oscillator/amplifier technology. The use of a Yb-doped fiber-oscillator/fiber-amplifier design combines the low noise performance associated with solid state operation with the high spatial mode quality of fiber lasers.

IMPULSE is a compact, robust, one-box source of femtosecond to picosecond pulses with the ease-of-operation, stability and reliability you would expect from a fiber source. And all its major parameters are computer controlled, which allow it to be easily interfaced to your industrial workstation or experiment.

1 Optional pulse picker available to adjust repetition rate in the range of 100 kHz to single shot. 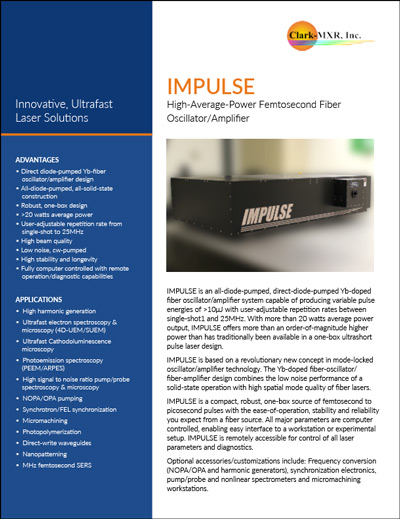