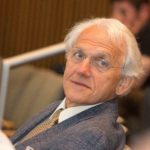 The second half of the prize will be equally shared by Gérard Mourou and Strickland “for their method of generating high-intensity, ultra-short optical pulses.” This method is well known as chirped-pulse amplification (CPA) and it has revolutionized the generation of energetic ultrashort laser pulses. Laser Focus World Senior Editor John Wallace gave a good overview on the technology and its devices in 2015.

Amplified femtosecond lasers for micromachining became an option in the early 1990s, also inspired by Mourou: “Dr. Gérard Mourou, then a professor at the University of Michigan and a founder of the MXR portion of what became Clark-MXR in 1992, was the first to recognize that femtosecond pulses of light ablated material in a more deterministic manner and with less heat-affected zone (HAZ) than longer laser pulses,” said Bill Clark from Clark-MXR in an interview.