Catching Molecules in the Act 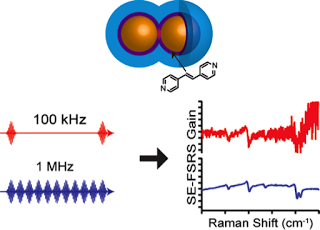 Chemical reactions are characterized by the motion of atoms; transformation of chemical compounds, reactants, and raw materials is therefore governed by molecular vibrations. While the motion of the atoms is easily seen at the beginning and end of a chemical reaction, the molecular changes occur too rapidly in the middle of the process, making them impossible for humans to observe.

With novel techniques that employ the use of ultrafast lasers, however, we can essentially freeze the chemical reaction. This allows us to thoroughly observe the intermediate steps of the chemical reaction that were previously incomprehensible, even permitting control of these reactions. Surface Enhanced Femtosecond stimulated Raman Spectroscopy (SE-FSRS) is one such technique: with SE-FSRS, we are able to study chemical bond-breaking and formation at the femtosecond timescale. (Some perspective: one femtosecond is one millionth of one billionth of a second.)

The research group of Professor Richard Van Duyne at Northwestern University utilized and improved upon the SE-FSRS technique in this study of chemical reaction dynamics. In this research, the experiments were performed at 1 MHz repetition rate using the IMPULSE laser from Clark-MXR, Inc., the first time that the SE-FSRS technique has been used with a laser source running at this repetition rate. The researchers found that the 1 MHz system resulted in several advantages when compared to previous implementations that used lower repetition rate lasers: the 1 MHz system allowed for a lower pulse energy and a minimized sample exposure time, leading to less sample degradation and increased signal to noise. The success of this research has established SE-FSRS as a robust tool for studying molecular dynamics, opening the door to several other potential applications of the technology.

In their next endeavor, the researchers at Northwestern University are planning to perform time-dependent studies, which will allow them to effectively catch the molecules in their act.